Prayer for an Oilfield

“Prayer is meaningless unless it is subversive, unless it seeks to overthrow and to ruin the pyramids of callousness, hatred, opportunism and falsehood. The liturgical movement must become a revolutionary movement, seeking to overthrow the forces that continue to destroy the promise, the hope, the vision.”  – Abraham Joshua Heschel

Tens or hundreds of millions of years ago you were were not a monolithic ‘resource.’
You were millions of resourceful microscopic plants and animals.
You were an ocean of life and activity, absorbing rays from the same sun as I do today.
You stored this light inside you in the form of carbon, but did you care about that?
You (all of you) lived and died and fell to rest at the bottom of a vast sea
and your children and your children’s children and so on did the same
until a palimpsest of sediment formed; innumerable animals,
organisms and bacteria, once very much alive, laid there in peace.

Over time, your peaceful grave would be buried deeper and deeper,
heat and pressure would rise and new molecules would form.
In your new form, you would migrate through tiny pores of rock deep within the earth,
safely nestled in crevices miles below, settling.
Some of you nomads would make your way back to the surface,
some of you would move farther below.

Dear Oilfield, I don’t think you ever meant to be an oilfield.

Dear Oilfield, you are ancient, you are probably wise. You were not designed
to be destroyed, exploited, devastated by one eager, credulous species.

I pray the violence inflicted upon you will end.
I pray what’s left of you will be liberated so some semblance of you can heal.
I pray for alternatives, for some radical empathy
where millions-year old molecules have an intrinsic value in being left alone,
for the good of the planet and all future organisms. 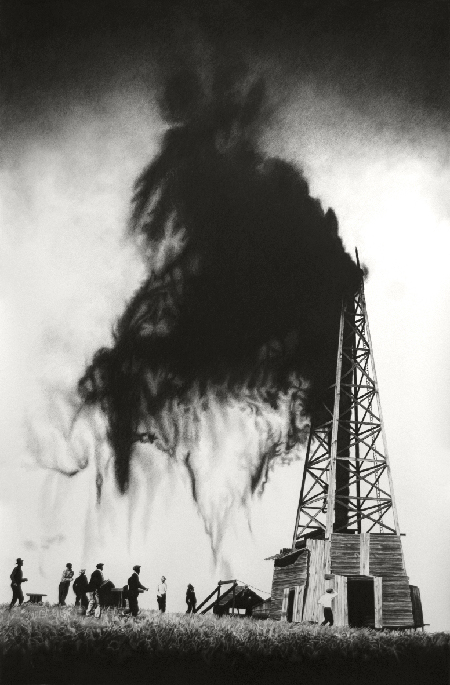 In 2016, Oklahoma governor Mary Fallin declared October 13th to be “Oilfield Prayer Day”. The above prayer was written one year later by artist Rena Detrixhe, an artist-in-residence at the Tulsa Arts Fellowship. October 13 is also her birthday.

A studio visit with Kathy Liao