A studio visit with Susan White

A visit to Susan White’s studio is a meditative experience. Located in the Kansas City Livestock Exchange Building, her 5th floor, east- and south-facing windows overlook downtown Kansas City, the West Bottoms’ urban art enclaves, and also the industries that built the city: railroads, stockyards and steel manufacturers. Her artwork is a seamless composite of those natural and unnatural elements. One ongoing artistic process involves collecting honey locust thorns to create installations that are placed and balanced into a treacherous flow of beauty. Anyone who has encountered a thorn in the wild has likely cursed their existence after stepping on one, or attempted to remove the thorn from its host tree. White seeks them out, to form wall and table sculptures that respect both beauty and strength, using their prickliness as part of the narrative. White’s studio is tidy and mostly a neutral monochromatic color scheme, aside from a wall of separated blue-painted and red-painted honey locust thorn cascades.  The thorns were taken from White’s previous installations, Flag, Flag II and Flag III which were displayed at Cara y Cabezas Contemporary, Haw Contemporary, and Mid-America Arts Alliance. She re-installed the “Flag” remains temporarily in her studio, in their own designated color spaces, which furthers her artistic narrative of the current, polarized American political landscape.

Below is a gallery of photos from Susan White’s studio, and following the photos is a brief Q&A exchange follow-up I had with White, post-studio visit, when I had a chance to reflect more on her work and artistic vision. 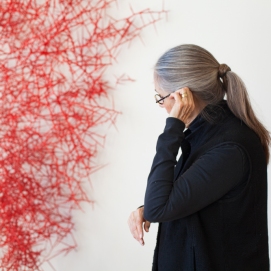 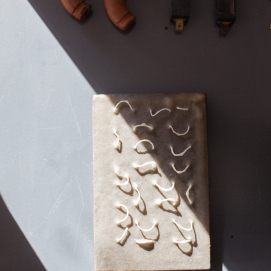 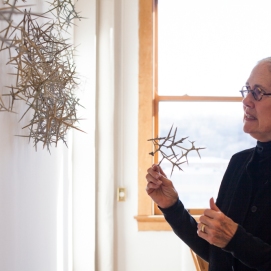 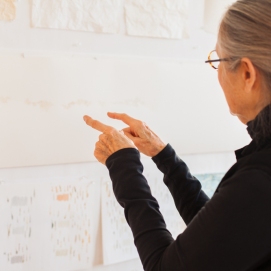 How has your artistic approach changed through the course of your career?  What have you learned from those changes?

I think that early on in my career my choice of materials was more eclectic and my work was driven by an interest in manifesting a kind of deep psychology. With time, my work is no doubt driven by some of the same influences but they have become distilled. While my earlier work might have embodied more raw emotion, I think that that emotion has mellowed and become less specific and more atmospheric in a sense. My concerns have become more universal and less individual. Perhaps I have learned that I am one of many.

Is there a particular geographic place (or places) that have inspired your work?

The Flint Hills, the Kansas landscape, the broad expanse of sky and the horizon line, the burning of the fields resulting in the rich, velvety brown surface of the land. Many people are affected by the mountains and the oceans, but spending time in the Midwest, driving across the Kansas landscape on my way to Colorado, Wyoming, Montana, I’ve been hugely affected by the majesty of the plains. They are expansive, quiet, imposing in their austerity, their simplicity. They offer a kind of geographic meditation. The landscape in Japan. Years ago while in Japan I traveled to the island of Naoshima. While in the train, the image of the brilliant green rice paddies with the mountains in the distance obscured by a blue haze, passing by however fleetingly, has stayed with me over time.

You have a style that plays to both meditation and contentiousness. Which force is stronger at the moment? (Peace or angst?)

I suppose they feed one another. I’ve never felt more politically angst filled and the work with thorns seems a terrific means to express that. Yet this anxiety and fury pushes me to find a quiet relief, a kind of solace in nature, in process, in meditative work.

In what direction do you see your art moving?

The process of working with the thorns is rather methodical and circumscribed. I would really like for it to get looser, freer, more expansive…moving closer and closer to drawing and abstraction. I would like to find a way to introduce a sense of randomness.